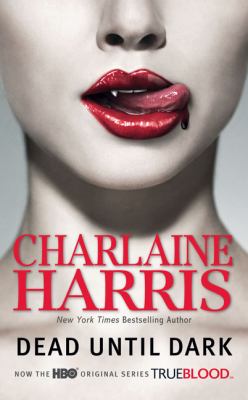 Dead Until Dark by Charlaine Harris

Looking for an enjoyable light read? Then Dead Until Dark by Charlaine Harris is your book.  Dead Until Dark is the first book in the Sookie Stackhouse Series (also known as the Southern Vampire Mysteries).  Charlaine Harris is an established mystery writer, having written several different series and additional non-series books: The Harper Connelly Mysteries, The Lily Bard Mysteries, The Aurora Teagarden Mysteries, and more.  Born and raised in Mississippi, Harris has been writing for thirty years; earning her New York Times Best Selling Author status.  Having read over ten of her books, most more than once, I’d say she deserves this recognition.  Her latest books, including the Southern Vampire Mysteries, are in the urban fantasy genre.

Dead Until Dark, and the rest of the series, centers on Sookie Stackhouse, a barmaid in Bon Temps, Louisiana.  As the story is narrated from her point of view, you learn that she has a little quirk, what she calls a disability; she can read other people’s minds.  However, unlike most stories, where a character’s supernatural ability is the main focus of her life, Sookie treats her telepathy as routine and just another obstacle in life.  The story begins just a couple years after vampires have “come out of the coffin”.  When scientists in Japan created a new synthetic blood, which the vampires could survive off of, the vampire community was able to integrate into human society.  However, there were still a number of human-killing and blood-sucking incidents that occurred when some vampires were not amenable to the idea of living alongside humans.  Many humans did not agree with the idea of vampires having equal rights, either.  So, when a vampire, Bill Compton, walks into Merlotte’s, the restaurant where Sookie works, she is thrilled.  However, the sparks that fly between the two may be for the worse, when a murderer begins to go after women who sleep with vampires.

Harris sets herself apart from other authors in this genre by changing the background.  Instead of an average middle class hero, this book takes working class people in a small southern town.  “Rural America finally has a vampire story to call its own,” says Tanya Huff.

Dead Until Dark is a light read, yet it still offers great entertainment.  This vampire romance/mystery has been highly successful.  In 2001, it won the Anthony Award for Best Paperback Mystery, and the entire Sookie Stackhouse Series is a New York Times Best Selling series.  Publishers Weekly proclaims, “Harris is an author of rare talents.”  Additionally, Producer Alan Ball has created an HBO series, True Blood, based on the books.

Dead Until Dark is the perfect read for the beach or airplane.  In Dead Until Dark, Harris especially invites female readers to enjoy a tantalizing yet risqué story, but even my father admits that it is a “real page-turner.”  So far, there are eleven books in the Sookie Stackhouse Series, and the twelfth, Deadlocked, is finished but not yet released.