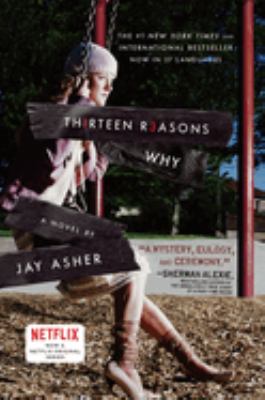 Thirteen Reasons Why by Jay Asher

Jay Asher is an American author whose primary focus are contemporary novels for teens.  Inspired by events from high school, he has created a New York Times and international bestseller: Thirteen Reasons Why.

Teenager Clay Jenson found a shoebox sized package addressed to him on his doorstep one afternoon.  Upon opening said package, he found seven audiotapes.  No note and no instructions were found, but the sides of the tapes were labeled one to thirteen.  Clay is instantly shocked when he hears Hannah Baker’s voice, for 16 year old Hannah killed herself just days ago.

Thirteen of Hannah’s classmates were selected to listen to and pass on the tapes that were mailed the day she committed suicide.  “I’m about to tell you the story of my life,” Hannah says, “more specifically, why my life ended.  And if you’re listening to these tapes, you’re one of the reasons why.”  Each tape was about a specific person, and the tapes were sent to everyone she talked about.  Hannah created a system that ensured the tapes would get to all of the intended audiences.  Whoever received the tapes would send them to whoever was mentioned after them in the tapes.

All through the night, Clay listens.  He follows Hannah’s words through the small town he lives in.  He is captivated, devastated, and what he learns changes his life forever.

As a reader, I was as captivated by Hannah’s words as much as Clay was.  Jay Asher skillfully combined Hannah’s story with Clay’s ever mounting anxiety and dread.  It was impossible to let go of this book after reading the first page.  Entertainment Weekly calls Thirteen Reasons Why, “suspenseful and addictive”.  This is a book that will stay with you long after you put it back on the shelf.