I Capuleti e i Montecchi is one of the loveliest and most moving of bel canto operas, though not among the more frequently performed. When Anna Netrebko and El na Garan a sang Giulietta and Romeo in Vienna last year at the performances documented in this recording, critics were enthusiastic. They found that Giulietta suited Anna Netrebko especially well, and she could show to full advantage her rounded tone and creamy timbre in every register.

Andrea Bocelli’s new studio album is a collection of the most famous Italian songs – including Mamma, Funiculi Funicula and Santa Lucia. They are the songs which have enchanted Andrea since childhood. Released to coincide with his 50th birthday, the album is a personal tribute to his musical heritage. Popularized through concert, radio and record and the film industry by the great tenors of the 19th and 20th centuries, this selection of songs is a celebration of the Italian tenor tradition. Thanks to the legendary voices of Enrico Caruso, Beniamino Gigli, Franco Corelli, Mario Lanza and Luciano Pavarotti, these songs have become a huge global export and fueled the romance of generations to come.

The King of the High Ds returns with an all-new album of bel canto arias and duets. Juan Diego Florez once again proves why he is THE tenor in demand around the world for the operas of Bellini, Donizetti and Rossini. In fact, he even broke the 70 year-old taboo against encores at La Scala in Donizetti s La Fille du Régiment, effortlessly tossing off 18 high Cs in a row (twice as many as other tenors)! For this special album, Florez is joined by an all-star roster of his friends, including Anna Netrebko, Placido Domingo, Mariusz Kwiecien, Patrizia Ciofi and Daniela Barcellona. Rarely have so many talents come together on one all-new recording.

Two CD collection featuring the finest voices in Opera performing the most beautiful arias by the classic composers. An aria is a self-contained piece for vocals with orchestral accompaniment and this collection gathers together arias that will touch your heart and relax your soul as you are lifted by their beautiful melodies. 40 tracks including solos from Placido Domingo, Jose Carreras, Jennifer Lamore, William Christie, Marcello Viotti and many others.

Opera in 3 acts. Libretto by Paolo Antonio Rolli, based on the libretto La costanza in trionfo by Francesco Silvani. Note: Recorded Sept. 2005, at the Chiesa di San Silverstro, Tuscania.

Alan Curtis, lauded by Opera as one of our finest conductors of Baroque opera, illumines Handel s masterpiece, Alcina, by casting, as heroine, the brilliant Joyce DiDonato. Since Alcina is historically dared by virtuosic sopranos like Sutherland and Battle, this innovative recording with a mezzo is a must-have not just for Alcina freaks but all who adore sensational vocalism. As Handel did in his time, Curtis arrays our era s finest Baroque singers such as Maite Beaumont and Karina Gauvin in supporting roles around his star. With this electrifying Alcina, first ever studio recording of the rarely heard Ezio and Rolando Villazón s new album, Handel Year 2009 is being exceptionally well feted by Deutsche Grammophon.

Jonas Kaufmann is without question the most versatile tenor of his generation, and his current repertoire includes an astonishing range of opera roles from Mozart to Wagner. He is also a celebrated Lieder interpreter, equally at home on the concert platform. His Decca Debut album celebrates a luscious range of Romantic opera arias, showcasing the astonishing diversity of his voice.

This exciting new release is the debut Virgin Classics recording of the vocal & instrumental group L’Arpeggiata, led by harpist and lutenist extraordinaire Christina Pluhar. The group creates an intoxicating blend of early music and jazz, creating a sort of “baroque jam session” built on technical expertise, rich textural explorations, and daring improvisations. This album explores the music of Claudio Monteverdi, both instrumental pieces and arias. The vocal works feature the brilliant vocal talents of countertenor Philippe Jaroussky and soprano Núria Rial, who come together for the final duet from L’Incoronazione di Poppea — one of the most beautiful and sensuous love scenes in all of opera. This release is sure to please fans of early and vocal music, though the improvisatory jazz and world music influences will certainly interest fans of those genres as well. Overall, a fascinating, fresh new release from a group to watch.

Back by popular demand–Pavarotti’s Greatest Hits! Celebrate the life and career of Luciano Pavarotti–the world’s most famous tenor and King of the High C’s! First released as an LP in 1980 and then again in 1985, this is one of Pavarotti’s best-selling albums. Instantly recognizable cover features classic photo of Luciano Pavarotti dressed as Pagliaccio from I pagliacci. Chock-full of his all-time greatest hits including Nessun dorma, La donna è mobile, Vesti la giubba, Funiculi Funiculà and more!

Britain’s Got Talent winner Paul Potts has spent most of his life feeling ‘insignificant’. Bullied at school for being ‘different’, he realized growing up that he had one true friend and that was his voice. Singing was his escape. He was able to lose himself in his own little world – the vicious words of his tormentors replaced by hauntingly beautiful lyrics and melodies that lifted his heart and spirit. It was a love, a passion, a lifeline that would follow Paul into adulthood and help him through many more periods of adversity.

Passione Paul Potts CD 781.63 POT 2009 British singing sensation Paul Potts returns with his eagerly awaited 2nd album, Passione. Recorded with the Czech National Symphony Orchestra, Passione contains 10 beautiful songs sung in Italian including covers of some of the most beautiful tracks ever written and a couple of originals. Also included is a stunning duet with Hayley Westenra. 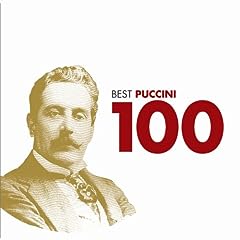 In 2008, the world honors the 150th anniversary of the birth of Giacomo Puccini (1858-1924), one of the most popular composers of all time, and perhaps the last in the line of gifted melodists and dramatists to shape the genre of Italian opera. This 6-CD set features highlights from all his major operas, as well as the early Messa di Gloria. The recordings (all stereo) come from EMI’s unrivalled operatic catalog, and feature some of the greatest stars in the world of opera, including Maria Callas, Mirella Freni, Giuseppe Di Stefano, and more!