To see if the item is available, click on the title.

The Bishop’s Wife – Cary Grant stars as an angel who materializes in answer to the prayers of a harried young bishop, David Niven. Niven’s efforts to raise money for a new cathedral have endangered his marriage to beautiful Loretta Young. Grand hopes to end the problems plaguing the family, but instead the bishop’s neglected wife becomes infatuated with him. (NR, 109min, 1947.)

Blossoms in the Dust– To Edna Gladney, founder of the Texas Children’s home and Aid Society, every abandoned child deserves the miracle of a loving home. Edna’s devotion echoes today as she declares, “There are no illegitimate babies– only illegitimate parents.” (NR, 100min, 1941.) A Charlie Brown Christmas – ‘Tis the season to be jolly, but Charlie Brown, feeling that the Christmas message is lost amid all the seasonal glitter, has the blues. Join the Peanuts gang as they discover for themselves the true meaning of Christmas. (NR, 48min, 1965.) 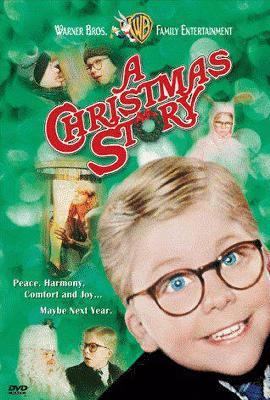 A Christmas Story – Ralphie, a nine-year-old boy in 1940s Indiana, dreams of receiving a Red Ryder BB gun for Christmas but encounters resistance at every turn when he makes his wish known. (PG, 98min, 1983.)

Deck the Halls – Two neighbors in a small New England town go to war when one of them decides to decorate his house with so many Christmas lights that they are visible from space. The neighborhood is turned upside down as the families try to discover the true meaning of Christmas. (PG, 95min, 2006.)

Elf – A human baby accidentally ends up at the North Pole and grows up among the elf community. Buddy, as he comes to be known, knows that he’s “special”. When he’s 30, Buddy learns from Santa that he’s really a human. He decides to go in search of his father, to find out where he belongs. He walks to Manhattan, and is immediately run over by a cab. His father at first rejects him and Buddy ends up in a department store where other elves are working. But all the while, things are looking bad for Santa Claus. When Santa crashes his sleigh in Central Park, it’s Buddy’s moment to shine. (PG, 97min, 2003.)

Four Christmases – Every Christmas, Brad and Kate escape divorced parents and exasperating relatives by getting on a plane. But this year, heavy fog shuts down the airport, forcing the couple to celebrate Christmas with four sets of relatives. (PG-13, 88min, 2009.)

Fred Claus – Fred Claus has lived in his little brother’s shadow for most of his life. Fred is in jail and Nicholas has to bail him out on the condition he come to the North Pole and repay his debt. (PG, 115min, 2008.)

Holiday – Amanda lives in Los Angeles and is a movie trailer editor. Iris lives in Surrey, England and is a journalist. The two live five thousand miles apart and have never met, but are dealing with the same problem: men. They both come upon a website that advocates home exchange and the two swap houses for two weeks at Christmas, both with a goal to forget their troubled love lives. Love ends up finding them anyways. (PG-13, 136min, 2006.)

Home Alone – An eight-year-old boy is left home alone on Christmas, and has to defend his home against two bumbling burglars.(PG, 103min, 1990.)

Home Alone 2: Lost in New York – Kevin McCallister is ready to turn the Big Apple into his own playground. The notorious Wet Bandits, still smarting from their last encounter with Kevin, are plotting a huge holiday heist in New York. Kevin’s ready to welcome them with a battery of booby traps that the bumbling bandits will never forget. (PG, 120min, 1992.)

It’s a Wonderful Life – An angel helps a compassionate but despairingly frustrated businessman by showing what life would had been like if he never existed. A Christmas classic. Features both the black and white and the colorized version. (NR, 130min, 1946.)

Lethal Weapon – The story of two Vietnam-vets-turned-cops who have just one thing in common: both hate to work with partners. But their partnership becomes the key to survival when a murder investigation leads to war with a heroin ring. (R, 117min, 1987.) Love Actually – It’s all about love and holiday cheer in London. The Prime Minister is smitten with his caterer; a widower’s young son nurses the ultimate schoolboy crush; a writer falls for his Portuguese housekeeper; a devoted wife and mother copes with her potentially unfaithful husband; and a lovelorn American is desperately attracted to a colleague. (R, 135min, 2004.)

Miracle on 34th Street – In this Oscar-winning classic, a Macy’s Department Store Santa who insists his name is Kris Kringle teaches everyone a lesson in love, faith and the value of imagination. (NR, 97min, 1947.)

National Lampoon’s Christmas Vacation – Christmas is the perfect season for Clark Griswold and his family. Clark’s a disaster waiting to happen. You have to see it to believe it. There are 25,000 lights on the Griswold rooftop. An exploding turkey. And a house full of relatives. (PG-13, 97min, 1989.)

Nothing Like the Holidays – For the first time in years the entire Rodriguez clan comes home to Chicago to celebrate Christmas where traditions will be celebrated. During the course of this eventful week they will celebrate one member’s safe return from Iraq, secrets will be revealed, old resentments forgotten, each family member will learn something about themselves and each other, and the healing power of laughter will work its magic. (PG-13, 98min, 2008.)

Polar Express – When a doubting young boy takes an extraordinary train ride to the North Pole, he embarks on a journey of self-discovery that shows him that the wonder of life never fades for those who believe. (G, 100min, 2004)

The Santa Clause – Scott is distressed to learn that his ex-wife and her husband have informed his son, Charlie, that there is no Santa Claus. While a sullen Charlie visits his dad on Christmas Eve, a noise on the roof brings them outside. It turns out that there is a Santa after all, and Scott has just accidentally killed him. Because of “the Santa clause,” Scott inherits the job of Santa. As the next year passes, Scott rapidly gains weight, grows a white beard and meets the elf Bernard. Charlie’s stepdad becomes concerned about Scott and forces him to undergo a psychiatric evaluation. (PG, 97min, 2002.)

The Santa Clause 2 – Scott Calvin has been Santa Claus for the past eight years, and his elves consider him the best ever. But Santa’s world is turned upside down when his son gets on the naughty list, and if Scott doesn’t marry soon, he’ll stop being Santa forever. (G, 104min, 2003.)

The Santa Clause 3 – With another Christmas season fast approaching, Santa Claus/Scott Calvin is feeling even more pressure. Mrs. Claus is expecting a little Claus. She is also longing for the company of some “tall people.” So Scott agrees to let her parents visit as long as they believe that they’re really in Canada rather than at the North Pole. (G, 92min, 2007.)

This Christmas  – For the first time in years, the entire Whitfield clan has come home to spend the Christmas holiday with their mother and her boyfriend. Each has brought plenty of baggage along with them. As the lights are hung and the tree is trimmed, secrets are revealed and ties are tested, but eventually they rediscover and celebrate the wonderful gift of family. (PG-13, 119min, 2007.) Tim Burton’s Nightmare Before Christmas – Jack Skellington, the Pumpkin King of Halloweentown, decides to give Santa Claus the year off and take over Christmas — and the holiday will never be the same. (PG, 76min, 1993.)

Trading Places – he lives of an upper class commodities broker and a homeless street hustler cross paths when they are unknowingly made part of an elaborate bet by two rich brothers. (R, 116min, 1983.)